Poppy is a winning poster girl and Veteran Aware

A powerful poster from schoolgirl Poppy Gallimore, explaining the important role that the armed forces play in keeping us safe, is the winning entry in a veteran’s art competition organised by staff at Tameside Hospital.

As a Veteran Aware organisation, Tameside and Glossop Integrated Care NHS FT wanted to show how it aims to give the best possible care and treatment to people who have served in the Royal Navy, Army and Royal Air Force. And to do that local primary and secondary schoolchildren were invited to design a poster to show what ‘Veteran Aware’ means to them.

Eight year old Poppy, from Denton (whose winning entry is pictured here) was invited to meet Fiona New, Associate Medical Director who leads on the Trust Veteran Aware Support Group, on Remembrance Day last Thursday. She was presented with a gift voucher and was able to share her work with staff, patients and visitors.

Mum Kelly said Poppy took time to research the topic as she wanted to get it just right, but once she had the words, the poster was completed in just 20 minutes. “Poppy couldn’t believe she’s won when she was told, and she did ask if it was because her name was Poppy and it was being announced on Armistace Day.  For her it wasn’t about the prize she was just so amazed she’d been chosen. And she loved sharing her poster with her friends at Corrie Primary School. Her great grandad was in the SAS. She never knew him but she’s always chatting to my dad about him so maybe that helped her better understand the role the armed services play.”

Fiona New explains; “ We are proud to be one of a group of 75 NHS providers have been accredited as exemplars of the best care for veterans, helping to drive improvements in NHS care for people who serve or have served in the UK armed forces and their families. We inform staff if a veteran or their GP has told the hospital they have served in the armed forces to ensure that members of the forces community do not face disadvantage compared to other citizens when accessing NHS services.”

Trust Chief Executive, Karen James says she was truly impressed with Poppy’s poster and the thoughtful way she had chosen her words and images. “ She is clearly a kind and caring little girl who understands the vital role that the Army, the Royal Navy and the Royal Air Force play in protecting us, and how important it is that we support and care for our armed forces veterans.” 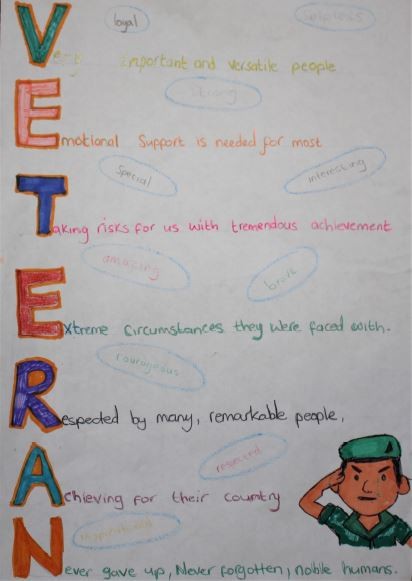