More than thirty years ago Laura Serrant was one of the first nursing students to graduate from Sheffield City Polytechnic.

Professor Laura Serrant's long and varied career in healthcare has seen her work to tackle social attitudes towards HIV and AIDS in the early 1990s and travel to America and the Caribbean to research prostate cancer among black men. She has helped to shape national healthcare policy in high-profile roles with the government and NHS England.

Born in Nottingham to Dominican parents, Professor Serrant qualified in 1986 after studying on one of the few nursing degree programmes in the country. Based in Collegiate Hall at Collegiate Campus, Laura was the only black student amongst the 30-strong cohort that had enrolled onto the four-year course.

Laura says: "Being the only black student was a source of pride for me as I was the first person in my family to go to university. I always felt well supported by the university, especially Peter Twomey my personal tutor -  it was also sometimes difficult - especially when patients refused to be touched by 'that black nurse'. But I always knew this was what I was meant to do."

Laura's first job after qualifying was in gynaecology at the Jessop Hospital and during that time she returned to the University to study a part-time master’s degree in Women's Studies.

But when the HIV and AIDS pandemic struck in the early 1990s, Laura went to work in sexual and reproductive health - a move that would inform a huge part of her career. Following the birth of her son in 1990, Laura returned to Nottingham to work as a nurse and outreach worker around HIV and AIDS.

She then went on to undertake a number of research roles at the University of Lincoln and the University of Wolverhampton followed by an 18-month secondment as head of evidence and strategy at NHS England, informing the development of the new nursing and midwifery strategy that launched in April this year. 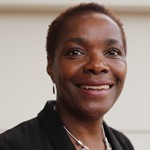